Lungary was unified under the Kingdom of Lungary in the 11th-century. Following a coup d'état in the 1500s, the kingdom was taken down and replaced with the Lungarian Empire, which annexed the nearby kingdoms of Haff and Efterland. In the 16th-century, Lungary began bringing slaves from Blasmer to Wechall in order to work in agriculture, which greatly increased their wealth and power. In the early 19th-century, both Haff and Efterland gained their independence from Lungary through the War of Independence, and with the empire destroyed, Lungary established itself as a constitutional monarchy. King Otto V has ruled as a constitutional monarch since 1979.

Lungary is a massively industrialized nation, containing one of the five largest cities in Wechall. Approximately 40% of the 45.3 million Lungarian population resides in urban areas, with the remaining 60% residing in towns, villages, and rural areas. Of the population, 89% identify as ethnically Lungarian, with 75% as White Lungarian and 14% as Black Lungarian. The remaining 11% primarily consists of people of immigrant origin. The national and sole official language of the nation is Lungarian, a Taglag language, which is spoken natively by about 93% of the population. While the Lungarian constitution advocates for the freedom of religion, Lungarians largely adhere to Church of Lungary, a Christian religion. However, the population is largely irreligious.

Main article: States of Lungary.
Lungary is divided into eighteen federal states. Each state has its own constitution, state government, and is largely autonomous in terms of its internal organization. Three of the states are city-states, which consist of just one city: Elgerholme, Kolna, and Munbach. 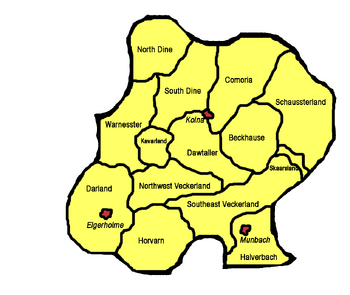 Retrieved from "https://wechallblasmer.fandom.com/wiki/Lungary?oldid=2080"
Community content is available under CC-BY-SA unless otherwise noted.